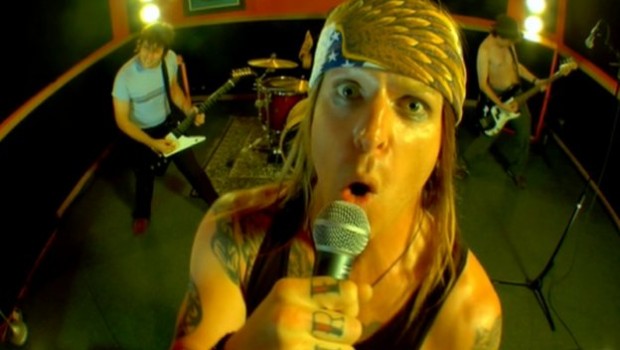 Spawning from The Jason Ellis Show on SiriusXM’s Faction, Taintstick’s Six Pounds of Sound is everything you expect from a collection of guys with nicknames like “Shaft Burn”; and “Tussinwolf”;. Fans of the show will immediately know what each band member is known for and lead singer Jason Ellis manages to hold a key throughout the album, changing up his sound and delivering to his fans a great little package of metal farce mixed in with catchy lyrics and some sweet guitar riffs.

Most of the songs on the album have been featured on the radio at one time or another during the production of the album, yet some are new to even the most die hard fans and bleed into a Steel Panther-like mentality of “death to all but metal.”; How else do you write an album and get through performing it with titles like “Sir Eagle Cock III“;, “Motodick“;, and “Monkeys of War“;?

The variation in the tracks is surprisingly vast with the hard hitting title track, and the aforementioned “Monkeys”; encouraging you to pump up the volume whereas softer tracks like “Apple Juice”; fall into an almost Blink-182 low-key melodic sound where you’re asked to pay attention to the ludicrous lyrics and laugh a little bit.

Laughing is certainly something that you’ll do as you make your way through the disc especially on “Sir Eagle Cock III“; an Irish-like jig that tells the story of a faithful noble bird, who was never blessed with genitals or “I Love Tiger, I Love Fifty“; sung by Ellis’ daughter which is basically the title repeated ad nauseam (Tiger is Ellis’ infant son and Fifty is the lead singer’s dog). However the biggest laugh comes in the form of a clean version of “Fuck Your Face“; included as the disc’s last track in which every word is pretty much skipped and only the backbeat remains.

Taintstick’s debut may only suffer from one thing and that’s the inability to be taken seriously in the long term. Fans of the show, of which this reviewer is one, will immediately have a lot to love out of the gate, however casual fans may find it hard to grasp on to anything without knowing the backstory. Was Six Pounds of Sound just a one-and-done release or will we continue to get new music from the band?

Regardless of the long term aspects, the thirteen tracks we do get are worthy of repeated sampling and should keep you laughing well into the next year.