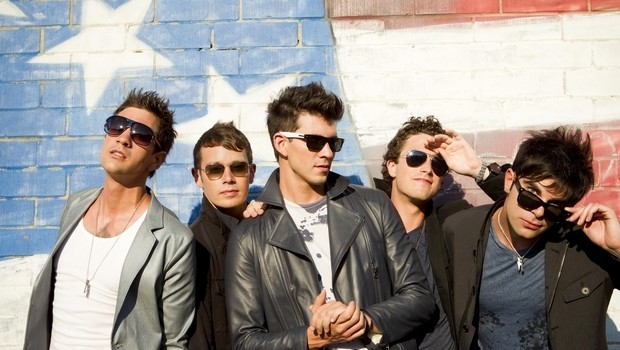 Is Runner Runner’s self-titled debut poppy and infectious? Yes, but can it really stand out from the littered alleyways of electro-tinged pop bands that came before them, not so much. While the band is certainly high on energy and very much into what they are doing, the debut just isn’t anything special in a world where pop bands appear and disappear nearly weekly.

The album’s first single, “So Obvious“;, is tearing up the Top 40 with regular airplay on terrestrial and satellite radio, so the word is definitely getting out there about the band. Comprised of front man Ryan Ogren (formerly of Don’t Look Down), guitarist Nick Baily (Over It), guitarist Peter Munters (Over It), bassist Jon Berry (Rufio), and drummer James Ulrich (Over It) the band almost has super status but the underground and non-mainstream nature of their previous work mean Runner Runner is their first release into the fray where selling records is the ultimate goal.

From a commercial standpoint RR has the market cornered with its sound and simple lyrics that are easy to get behind and belt out in the car cruisin’ down Main Street USA. When you’re lead single starts, “Go! Let’s go, go! Go! Let’s go, go!”; and hooks with, “I’m losing my mind, broken inside / I want you to take my breath away / It’s obvious that my heart beats for you (Beats for you, beats for you).”; It’s incredibly sappy, but it’s sure to sell some singles because the band and the record company know what teenage girls want. Is this an album for those of you who go to midnight releases of Cannibal Corpse and the like? Obviously not, but for the Bieber fans out there, get ready to be Run over.

This isn’t to say that Runner Runner won’t stay in the spotlight; the album crawls into your head and becomes a guilty pleasure for true rockers, and a mainstay on playlists for tweens and teens. Still, there is nothing really standing out of the crowd here and any one of the songs could be given to another similar sounding band and be pulled off the same way. Will Runner Runner run away with the industry? Probably not, but they’ll keep running through the minds of anyone willing to be infected, closet case or otherwise.

Check out the band on their MySpace page and see if we’re looney or spot on.