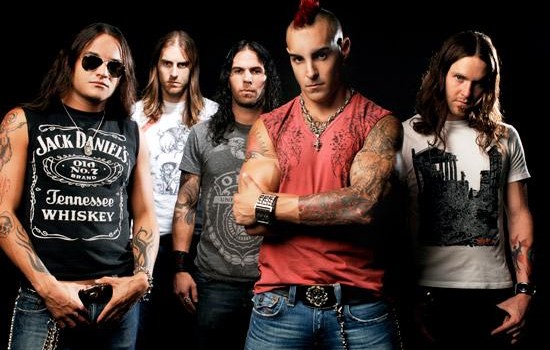 From the loud, bombastic opening single, “Hell Yeah“; (not to be confused with the band of the same name) Rev Theory’s Light It Up is a force to be reckoned with as the album starts pumping from its opening and never lets up the adrenaline push until the final cord is strummed and snare hammered.

Shortening their name, the band formerly known as Revelation Theory gives us an album that’s over far too soon, clocking in at only ten tracks, the disc’s length is its biggest hindrance, as there isn’t enough material to successfully sustain an audience for more than half an hour. Still, the tracks that do make it on the disc have a great replay factor, livening up a session of late night gaming or taking out some aggression away from the company of others.

Too often bands will fail to come through after a promising start (see Linkin Park’s Minutes to Midnight) as they draw you in with the fast paced, hard rock song and you’re later ambushed by songs full of feeling and a brooding so deep an emo band would be turned off. Yet, Rev Theory knew of this pitfall enough to liven up even the slower tracks with wicked hooks and a propelling chorus that breaks from the monotony of the melodramatic.

Tracks like “Ten Years“; start slow, drawing you into the sound, encompassing you in with a collection of slick riffs before opening up the floodgates and beginning the closing act of the disc with style. While the aforementioned “Hell Yeah“; is a modern stadium rock anthem, the title track “Light it Up“; and “Wanted Man“; each do their part in solidifying the band as one that is sure to stick around between periods at a hockey game or propelling through a sound system during a TV timeout this season in the NFL. Having already been picked up by the WWE, the band’s exposure is rising dramatically.

Aside from the shortness of the disc, clocking in a hair shy of 40 minutes, the only major stand out issue is some inconsistency in the tracks and a lack of variation. While it may seem interesting to praise a disc’s songs, and then call them too similar, the style of the music is great, you just wish there was a little more variety to them to make each one stand out as a work of its own. As it is now several bleed together at times, getting lost in the shuffle, and while this isn’t a major problem by any means, it is noticeable.

In any event, Light It Up is an excellent disc from a group of relative newcomers in the public’s eye. After heavy play on satellite and terrestrial radio the band has the momentum to light up the charts and keep rocking.