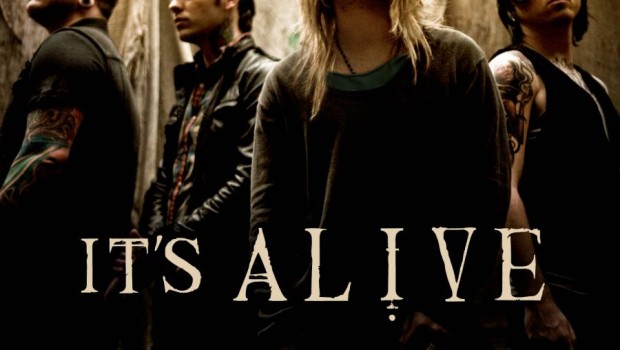 It’s Alive emerges from the depths of the modern rock landscape with a sound that’s both somewhat unique and familiar enough to fans of Fuel and Linkin Park to stand out and fit right in at the same time. The rock sound of singles like “Pieces“; (currently making the rounds on Top 40 stations and satellite radio) will bring in the fans whereas single ready songs like “Back Into the Rain“; will bring in the pop fans offering the band a kind of “best of both worlds”; hook akin to bands like Saving Abel and Nickelback, although drifting between hard and soft is sure to piss of a few faithful.
Many of the tracks, deal with hardship in destroyed and broken relationships, the prerequisite power balled “Selfless“; focuses on such themes and its direct follow up “Refuge From The Wreckage“; follows in the same vein. Vocalist Zach Webb describes himself as an art-rock-fan with bands like Genesis and Nine Inch Nails, and while its hard to see any Phil Collins or Trent Reznor on Human Resources, there is a certain art to the way each some is constructed, although the album is light on poppy hook, it’s a lot more moody in the vein of NIN’s The Fragile.

The album gets a little sappy towards the conclusion with titles like “Fool For You“; and “Can’t Love Me“; how can they not be a little emotionally intrinsic? Surprisingly they’re still listenable in their mellow state but they’re still a far cry from the rock-inspired opening tracks and the mix on “Fool For You“; is excellent.

Still, through it all, “Pieces“; is the highlight of the album and is the most accessible track to the average listener. Human Resources might have more of a sappy, love-struck, heartbreak tone to it than pure rockers would like but it’s an easy listen and enjoyable at the same time.