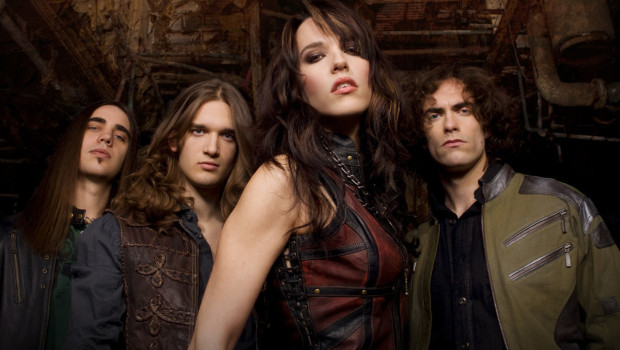 Halestorm’s sound is best described as chick rock for guys, where else are you going to hear a female-fronted rock band sing about how she gets off knowing that you get off watching her undress as in the album’s lead off single, appropriately titled, “I Get Off“;, makes you plainly aware of? This isn’t to say that Halestorm is for girls only, anyone with a love for rock music will find something to like here, but there aren’t too many good female-leading rock bands on the scene, so when a new one comes along, notice must be taken. It doesn’t hurt the case that Halestorm’s full-length debut is a competent and engrossing release either.

While “I Get Off“; is the band’s lead off single, the best track on the disc is the lead-off “Its Not You“; with Lzzy Hale’s piercing vocals and a collection of great riffs and hard driving drums. Other standouts include “Innocence“; with more a calm demeanor Lzzy is able to be a bit more melodic than some of the harder tracks on the album. The record seems to be front loaded, as most of the single-ready, rock-steady tracks are contained in the first half. “Familiar Taste of Poison”; could almost be mistaken for Evanescence at times with Hale’s vocal performance mirroring that of the great Amy Lee in tone and inflection. The album finishes out strong with the guitar-infested “Dirty Work“; and another of the album’s more memorable tracks, “Nothing To Do With Love“; with Hale screaming over herself in the chorus and sound damn good in the process.

The self-titled album is immediately accessible which is both good and bad for the band. The album, is at times, a little safe, and while the song writing is top notch, the sound can be culled into a collection similar sounding bands like Paramore, Lacuna Coil, and to a point Evanescence in that there’s nothing dramatically new here to stand out amongst the crowd. Now Lzzy is easy on the eyes, and her openness with lyrics like those contained in the aforementioned single will certainly get noticed, the band just needed more of a breakthrough. However, Halestorm will be new to everyone outside the state of Pennsylvania, and the band’s formation as pre-teens will certainly have critics talking and taking notice. Its almost as though this album is a safe way to get the word out and let the band grow and evolve once a national fan-base has been established.

This shouldn’t detract from an overall good record, but where it could have been outstanding the opportunity was lost a little. It certainly looks like this band is here to stay though, with major backing of a major label, the debut already digitally available for those who pre-order the physical disc, they’re riding the technology curve that has engulfed and destroyed other bands. While the sound may be trued and true, the old adage of if it isn’t broke, don’t fix it comes into play. Halestorm certainly does rock, as their motto goes, and there’s nothing holding them back from rocking for the next decade or more, hopefully they’ll take that next step in doing something truly special.