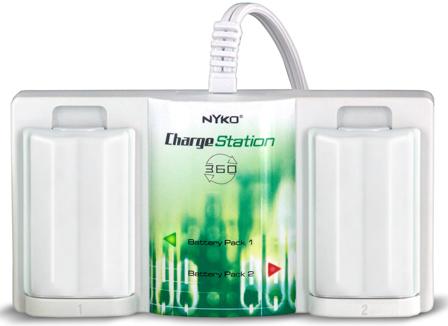 With the advent of the wireless controller, gamers’ living rooms have finally realized their full potential. Instead of being confined to a six foot lifeline to the console, players can now go anywhere in the room, and sometimes even the house to play games (take, for instance, bowling a strike from the kitchen in Wii Sports bowling while not even looking at the TV). However, this wonderful new frivolity comes with a rather expensive price. Batteries are quickly becoming the bane of many a player’s existence, and the worst part is that if you do not have a ready supply in backup, the afternoon you planned to spend toiling away at Halo 3 trying to make Brigadier can be ruined. Your entire gaming experience is hinged on batteries. Enter the NYKO Charge Station 360 rechargeable battery charger. Packing two rechargeable batteries and a relatively compact unit, it’s a handy addition to your gaming arsenal that saves you money big time in the long run.

NYKO has always been about ups and downs. It seems that the products that they deliver seem to barely miss the target on quality and style. That’s not to say that they do not make solid, good products, but they always seem to have their little nuances that just makes NYKO, well NYKO. I’ve read all over the internet about people having serious issues fitting NYKO’s battery into the Xbox360 controller, and even more complaints about people having one or both batteries not hold a charge at all. I did not experience either of these problems. The battery did fit a little awkwardly into the back of the controller, and by awkwardly I mean it did not simply glide into place like the Microsoft battery cartridge does. It seemed to be a big beefier than the standard, and fit a bit more snugly, but it did fit. I have used both batteries to see if one of them would burn out on me, and they both seem to last as long as I imagined they would. Perhaps there were bad batches of the charge stations, but I didn’t seem to have any of the problems that some people have with this station.

The only issue I had with the station is the goofy look of the battery pack. The 360 is all about sleek curves and nice lines, and here comes this battery with its pointed corners and goofy edges. It simply does not fit with the look of the console or the controllers. Thankfully, I never have to look at it, but I still know it’s there, looking like a country boy at a death metal concert.

Cost wise, this may be the better option, depending on your gaming situation. The cost of the NYKO Charge Station 360 and the official Microsoft charge station are about the same ($25 on Amazon), however, the NYKO station comes with two batteries. Microsoft, in their desperate attempt to make as much money as possible, charge the same price for the station and one battery, and an additional battery is another $12. If you have two controllers, the NYKO is definitely the cheaper way to go. If you are a lone gamer, either one would work for you, unless you are cheap and you play for like 14 hours straight, then you might want to get the NYKO to make sure you always have a fresh charge ready. All in all, even with the goofy look and the chance you might take of having to return the thing if it doesn’t work, NYKO once again delivers a decent, solid generic alternative to the expensive, money grubbing official brand. Either way you go, you’ll definitely be saving money in the long run by sticking it to the battery man, whoever that is.