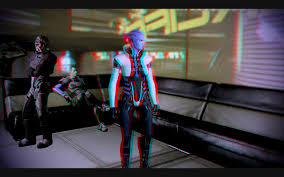 Summary: Once the novelty wears off, you have an average LCD and neat glasses

The idea of gaming in 3D is a novel one, and on paper it seems like a no-brainer. The bullets of a first person shooter flying towards you, the eerie atmosphere of Rapture seeping into you, the expansive land of Azeroth all around you, and the possibilities are endless. However, after a few hours of play you realize that 3D gaming is just like virtual reality, its neat, but it gets old fast and it won’t be long before you’re aiming to go back to a traditional setup with crisper graphics and less headaches.

The iZ3D 22” Widescreen LCD 3D Monitor is basically two monitors in one, utilizing dual DVI or one DVI and one VGA port the display presents two images slightly out of phase with one another. You, the user, use a set of polarized lenses to bring the images together and make them pop out of the screen. Subtle adjustments can be made to the “phase” of the images so you can line them up in your favorite games using hotkeys on the keyboard.

Setup of the monitor was okay, but not as intuitive as you’d expect. The screen ships with two dual-link DVI cables and a standard VGA cables. Your video card must have dual outputs for the monitor to work. The first problem here is with the connectors, the second DVI connector is placed directly in front of the stand, making plugging in the cable difficult for those with bigger hands, we actually had to remove the base and lay the monitor on its face to connect everything.

From a non-functional standpoint the monitor is much larger than your average LCD, this is because of the dual panel technology used to simulate the 3D images, the monitor is also heavier than a standard 22” (in this case a Gateway 22” Widescreen). Five buttons are located under the screen with a blue power light to the right of those. The monitor is able to be mounted to a bracket with four standoff holes on the rear and the entire stand can be removed. Only a vertical angle adjustment is available, no swivel and no turn into portrait mode from landscape.

Performance is where things really count and the iZ3D manages, but doesn’t astound. The first game we tried was the supposedly supported World of Warcraft, after booting into the game we activated the “stereo mode” by hitting the * key on the Num Pad, from here holding shift and tapping (-) or (+) on the Num Pad will adjust the offset of the two images. Assuming you keep your camera distance steady your character would seem in phase, however NPCs, icons, even trees and the road we were standing on in Thunder Bluff seemed out of phase. A slight adjustment of the camera distance meant we had to recalibrate the offset once again. The 3D images didn’t seem to pop as much as we’d like, and what we were left with was a slightly blurry experience.

The next test was to boot up Steam and try out Portal and Audiosurf, the former being supported, the latter not on iZ3D’s official game list. Portal wouldn’t even boot as it crashed out each and every time we tried to run it with the iZ3D drivers and monitor installed, the game ran fine without the monitor present. Audiosurf initially crashed when we attempted to put it into full screen but eventually worked. On the menus we were able to make the center of the screen stay in phase, however the top bar and bottom of the screen showed up as ghostly images akin to a TV signal over bad rabbit ears. Audiosurf itself was unplayable as the colored bars came at you in separate pieces, sometimes not being able to tell what color they were until just before your craft hit them, sometimes not until afterwards.

The iZ3D can be used as a standard monitor for office applications, although it isn’t a great one with colors being muddy and images being less crisp than competing monitors running DVI cables as well. For the price the lack of multiple inputs like component or composite is also disappointing. The novelty of the monitor will have you eventually going back to just a regular old flat panel, but you may keep the glasses around to look stylish while playing.